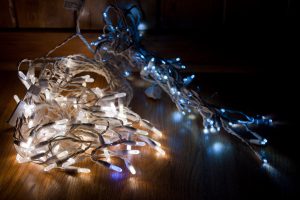 These are the days when you drive through your neighborhood comparing all of the different light displays. Have you taken part in the tradition of filling up your yard with 1,000s of lights in unique designs and displays? When you put up lights at your Marietta, GA home, you could be anywhere on the scale of intensity from just a simple garden, to competing with the Griswolds. Wherever you rate on the Christmas light display scale, there are a few things that you need to know about choosing the right string of lights for your creation.

Conventional Christmas lights have incandescent bulbs and are substantially cheaper than their LED counterparts. The bulbs looks good even when it’s not dark outside, and the give off the warm white glow that we are all used to seeing in traditional displays. Their downside is that the bulbs are made out of glass and therefore break easily. The bulbs go bad quite often leading to the tedious task of replacing bulbs, or even forcing you to throw out a whole strand of lights because they won’t turn on, versus checking every bulb on the strand of lights.

We’ve been seeing the new LED Christmas lights over the past several years, but until recently they had left a lot to be desired. They were over priced and gave off a light that was too bright or even bluish in hue. Finally, the LED manufacturers have caught on and are making the changes to LED strands so that they are more inline with their traditional counterparts. The new color called “warm white” gives off a color very similar to your traditional light strands. They prices have finally dropped some, although they still aren’t as cheap as the conventional strands. LEDs do use less energy and you are able to connect several strands together if you a limited on outlets, without worrying about overloading the breaker.

In summary, the difference between conventional lights versus LEDs comes down to the price tag. If you are wanting to make the switch to the new technology, we suggest waiting until the after Christmas sales when you can get them for half of their regular retail price. C&M Residential wants to know, what lights have you opted to use for your indoor and outdoor displays this year?

We provide landscaping and lawn maintenance services to the greater Atlanta area, including: